The Thai king has pardoned a Swiss man who was given a 10-year sentence for spray-painting over images of the revered monarch, but the longtime Thailand resident has been ordered to leave the country, police said Thursday. 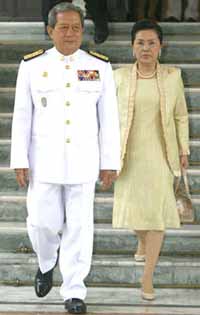 Oliver Rudolf Jufer, who last month became the first foreigner convicted in at least a decade under strict Thai laws protecting the monarchy, was expected to be deported back to Switzerland later in the day, said police Col. Sangob Sanudon, the chief of Chiang Mai's immigration office.

Police and prison officials in the northern city of Chiang Mai confirmed Jufer had been transferred Wednesday to a police station in Chiang Mai ahead of his deportation. They said he was expected to fly to Bangkok and then onto Switzerland.

"The king in his kindness has granted him a pardon and he has been transferred from prison and is in the process of being deported from the country," Chiang Mai police Col. Prachuab Wongsuk told The Associated Press.

A spokesman for the Swiss Embassy could not be immediately reached for comment.

Jufer was caught by surveillance cameras on Dec. 5 spray-painting black paint over five outdoor posters of King Bhumibol Adulyadej in Chiang Mai, where he lived.

Bhumibol, who is greatly loved by Thais and regarded by some as semi-divine, is protected from reproach by strict laws that forbid any criticism of the monarchy.

Jufer, who lived in Thailand for 10 years, pleaded guilty in March to five counts of lese majeste, or insulting the monarchy. He had faced a maximum of 75 years in prison.

According to court testimony, Jufer had been out drinking with a friend and drove his motorcycle home to pick up a can of spray-paint, which he had bought to paint his dog house. He drove up to a municipal office where a large poster of the king was hung outside, and climbed a ladder to spray paint over the image. He then defaced four other posters near his home, according to the testimony.

The vandalism coincided with Bhumibol's 79th birthday, which was celebrated across Thailand with fireworks and prayers.

Millions of portraits of the king, who is the world's longest serving monarch, were hung late last year around the country to honor his birthday. Many Thais wear bright yellow shirts every Monday, the color that in Buddhist tradition represents the day of the week on which Bhumibol was born.

His case cast a rare spotlight on Thailand's strict lese majeste laws, which have remained virtually unchanged since the creation of the country's first criminal code in 1908, despite the overthrow of an absolute monarchy in 1932.