Diego Maradona left a private clinic before dawn Wednesday after two weeks of treatment for acute hepatitis brought on by alcohol abuse, his doctors said. 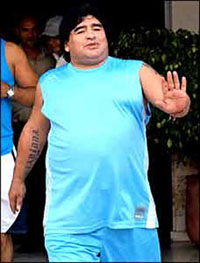 Argentina's 1986 World Cup hero managed to avoid the television crews that staked out the clinic since he was taken there by ambulance March 28.

The clinic director's statement was also signed by Maradona's personal physician, Alfredo Cahe, who said he brought Maradona to the hospital over his protests because of health complications blamed on too much drinking, eating and cigar-smoking.

The doctors recommended Maradona continue unspecified follow-up treatment to control his diet. Local reports said he was driven from the hospital in a car by a friend and an assistant and would spend coming days at a friend's home.

What comes next remains unclear for Maradona, who captained Argentina to World Cup glory in Mexico in 1986 and is still lionized by many here as one of the best soccer players ever.

Cahe had said Maradona was overweight and that he hoped to send him to Switzerland for treatment. But Argentine media speculated Wednesday that it would be hard for him to miss a chance to attend Sunday's matchup between his former team, Boca Juniors, and its archrival River Plate. That annual matchup is considered the biggest rivalry of Argentina's first-division season.

Maradona, 47, was near death during hospitalizations in 2000 and 2004 blamed on cocaine addiction. Doctors said he surmounted that addiction and dangerous drugs were not involved in his current health concern. He also had stomach surgery earlier this decade.

After a successful career at clubs in Argentina and Europe, Maradona retired in 1997.