About half of 2,000 stolen wedding gowns recovered in Mexico

About half of the 2,000 wedding gowns stolen here five months ago before they could reach a California fundraiser have been seized at the border by U.S. Customs and Border Protection officers. 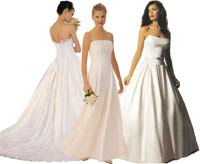 About half of 2,000 stolen wedding gowns recovered in Mexico

The gowns, valued at more than $2 million (EUR1.5 million), were discovered last week in a tractor trailer re-entering the U.S. at Nogales after attempting to go into Mexico, a U.S. Customs and Border Protection spokesman said Tuesday.

The driver of the trailer was arrested and the rig impounded at the port of entry, authorities said.

Fran Hansen, director of the Making Memories Foundation, said 1,024 of the donated gowns were recovered.

In November, the tractor trailer and cab carrying the gowns were stolen from the parking lot of a Scottsdale hotel.

The gowns were on their way to a fundraiser in West Hollywood, California, with the money going to women dying of breast cancer.

Hansen said she was not sure if the driver of the cab is connected to the thefts.

"We do have the trailer, and we do have the dresses," said Brian Levin, a spokesman for U.S. Customs and Border Protection.