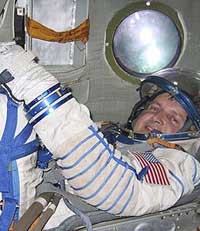 The three travelers opened the air locks and entered the station about 90 minutes later, to the applause of Russian and American officials and visitors at Russian Mission Control - including American lifestyle maven Martha Stewart.

Stewart is a friend of Simonyi, an American software programmer who shelled out US$25 million, or EUR19 million, to make the journey to the station and become the world's fifth paying private space traveler.

A video linkup at Korolyov, on Moscow's outskirts, showed the station's now six inhabitants joyfully greeting one another before receiving congratulations and well-wishes from Earth.

"How did the launch look?" Simonyi asked spectators at Mission Control.

"The launch was beautiful, Charles," Stewart told Simonyi. "I just want to say that we are happy for the safe and beautiful trip and I want you to know that we all think that you are a true pioneer.

"And guess what, Charles? You are now truly out of this world," she said.

"Martha, it is really an honor to be here on this outpost," Simonyi said.

Simonyi, who is Hungarian born, then turned upside down - to the amusement of spectators - and shared greetings in Hungarian with his brother, Tomas.

While Yurchikhin and Kotov are at the beginning of a six-month stint on the station, Simonyi is to return to Earth on April 20, along with Russian Mikhail Tyurin and Miguel Lopez-Alegria of the United States, both of whom have been on the station since September.

American Sunita Williams will remain on board with Yurchikhin and Kotov.

The arrival of a new crew is always a happy event, and in this case the pleasure was whetted by the resident crew knowing that Simonyi is bringing them a gourmet dinner.

The menu, including quail marinated in wine, was selected by Stewart. The dinner is to be eaten on Thursday, which Russia marks as Cosmonauts' Day, the anniversary of Yuri Gagarin making the first manned space flight in 1961.

Simonyi, 58, was born in Hungary but now lives in the United States, where he amassed a fortune through his work with computer software, including helping to develop Microsoft Word and Microsoft Excel.

Simonyi was bringing with him a sample of the paper computer tapes that he used decades ago when he first learned programming on a bulky Soviet machine called Ural-2.

While at the space station, Simonyi will be conducting a number of experiments, including measuring radiation levels and studying biological organisms inside the lab.