McDonald's Corp. agreed to pay a penny more per pound (0.45 kilogram) for its Florida-grown tomatoes. It will help boost wages for the migrant workers who harvest them, following a two-year campaign by an advocacy group that called for the increase. 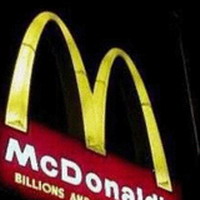 Under the agreement, a third party will verify that farmworkers who pick McDonald's tomatoes will receive the increase. Oak Brook, Illinois-based McDonald's will also require its suppliers to follow a workplace code of conduct that the workers would help create.

The deal involves payments for grape tomatoes that go on McDonald's salads. McDonald's USA spokesman William Whitman said the cost would not be passed on to consumers.

The announcement was made by the nonprofit Coalition of Immokalee Workers and the biggest U.S. fast-food restaurant chain at the Atlanta-based Carter Center, where they negotiated the deal.

The coalition targeted McDonald's in 2005 and was about to launch a cross-country bus tour to protest in front of the company's headquarters before the deal was signed.

The coalition had previously won similar concessions from Taco Bell after a four-year boycott against the restaurant chain, which is part of Yum Brands Inc. Numerous religious groups, including the Conference of Catholic Bishops and the National Council of Churches lent support to the coalition's efforts.

"This is one step forward in the fight," said coalition co-founder and farmworker Lucas Benitez. "It sends a strong message to the rest of the fast food industry that the leaders of the industry are taking concrete steps to improve the lives of workers, of human beings."

Florida pickers harvest about 90 percent of America's domestic winter tomato supply, but McDonald's mainly buys Florida grape tomatoes for its salads, about 1.5 percent of the state's tomato harvest. Farm workers are paid about 40 cents per 32-pound (30 EUR per 14.5-kilo) bucket. The new rate would nearly double their pay to about 72 cents (54 EUR) a bucket.

The coalition also recently began a similar campaign against Miami-based Burger King Corp., which has said it cannot control what its suppliers pay their workers.

"Given that we represent such a small percentage, others in the industry need to step up and follow our lead," McDonald's Whitman said.

"I encourage others to now follow the lead of McDonald's and Taco Bell to achieve the much needed change throughout the entire Florida-based tomato industry," he said.

McDonald's had previously refused the coalition's requests, maintaining it bought tomatoes through a third party and could not track where its produce came from. Instead, it sponsored a study - later discredited - that suggested farmworkers were paid more than twice the state's minimum wage. McDonald's also prompted Florida growers to develop a code to improve workplace conditions and protect workers. But farmworkers were not included in the development of that program, which did not call for a boost in wages.

Whitman credited the Carter Center for facilitating dialogue between the two sides and the company's suppliers who worked with McDonald's.

In Immokalee, Florida, the fastest pickers can earn more than $75 (56 EUR) a day for hours of back-wrenching toil, but most earn far less - though exact numbers are difficult to come by. Pickers can go days without work and get neither sick leave nor overtime pay.