US museum aims to set record straight over moon landing

A museum honoring the first man to walk on the moon is not afraid to confront conspiracy theorists who argue his 1969 lunar landing was a hoax. 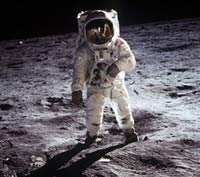 US museum aims to set record straight over moon landing

"If it takes a controversy to get them here, that's fine with us," said Andrea Waugh, an education specialist at the Armstrong Air & Space Museum, named after Apollo 11 astronaut and hometown hero Neil Armstrong.

The museum in western Ohio set up a display Saturday featuring some of the talking points that conspiracy theorists make in books and numerous Web sites to try to back up their claims that NASA staged all of its moon landings from 1969 to 1972 in a movie studio.

Claims that the lunar landings were fake can be easily debunked with facts and science, Waugh told visitors.

For example, a favorite conspiracy argument is that it is impossible for a U.S. flag photographed next to Armstrong and fellow Apollo 11 astronaut Buzz Aldrin to be fluttering in a lunar environment that lacks wind or an atmosphere.

The flag had a horizontal bar attached to it at the top to keep the flag from hanging limply down the pole, Waugh said.

And distorted shadows that appear next to astronauts in some of NASA's photographs - another sticking point with nonbelievers - are the result of sunlight reflecting off the lunar landscape, she said.

The museum's explanations were enough to convince Janet Rosengarten, who drove from nearby Sidney to see the exhibit.

"I've never had any question about it," she told local newspaper The Lima News. "I saw Armstrong land on the moon when I was 7 and I have no doubt it happened. But it's still fun to see the things people say who doubt it all."

The museum, which includes one of Armstrong's Apollo-era space suits and other artifacts from his career and childhood, is about 50 miles (80 kilometers) north of Dayton.