To find a bit of loose change, go to a casino and reach under your couch cushion. 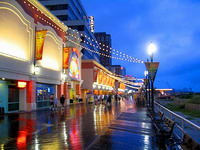 Only the change collected from under or around slot machines at the former Sands Casino Hotel in Atlantic City, New Jersey, topped $17,000 (12,700 EUR) worth of coins.

The casino was closed last November after 30 years and will be torn down later this year to make way for a new gambling hall. So when workers began removing the 2,350 slot machines for use at other casinos owned by the Sands' parent company, they expected to find a bit of cash.

"We never expected this much," said Carmen Gonzalez, a spokeswoman for Pinnacle Atlantic City. "It was just shocking."

The money belongs to Pinnacle Entertainment Inc., the Las Vegas company that purchased the Sands last year. New Jersey gets 8 percent of the money in taxes - the same as it would had the money been won from gamblers.

The money was coins, casino tokens and even a $100 bill.

Some change had rolled into small spaces between machines, but most of it was found underneath them. The older-style machines contained buckets inside to hold coins that were deposited, and when they overflowed, sometimes coins rolled underneath.

In-house workers made guesses about how much would ultimately be recovered, but most were wildly short.

The non-gambling contents of the Sands will be sold off next month, and the building is to be demolished, probably with a huge controlled implosion, in the fall.