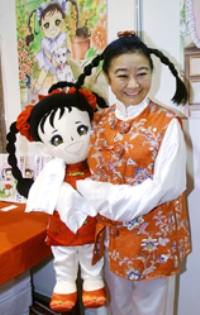 Nina_Wang  has died being 69, her spokesman said Wednesday. This pigtail-wearing lady   became the richest woman in Hong-Kong when inherited her husband’s fortune and   built a real-estate empire.

Hong Kong media earlier reported that Wang suffered from ovarian cancer and it had spread to her liver and other organs.

The story of Wang's ascent to Hong Kong's richest woman had the elements of a Hollywood movie - sex, romance, crime and courtroom drama.

Wang was born Kung Yu-sam in Shanghai. She married Teddy Wang and moved to Hong Kong in the 1950s, where her husband established the Chinachem Group, initially a pharmaceutical company.

Teddy Wang was abducted in 1990 as he left Hong Kong's exclusive Jockey Club. The family paid US$33 million (EUR24.7 million) in ransom but he was never freed.

Several of the kidnappers, later caught and jailed, said the 56-year-old Wang was kept aboard a sampan - a small Chinese boat - and later thrown into the sea, but his body was never found. He was declared dead in 1999.

Nina Wang never believed her husband was dead and insisted he would someday return.

In his absence, Nina Wang built Chinachem into a massive private property developer, with office towers and apartment complexes throughout Hong Kong.

Forbes magazine this year ranked her as the world's No. 204 richest person with a fortune of US$4.2 billion (EUR3.14 billion).

Wang captivated the public with her girlish dress, big eyes and round face. She wore garish outfits and kept her hair in pigtails. She was nicknamed "Little Sweetie," the Chinese name of a blonde, princess-like girl from a Japanese cartoon fairy tale.

Wang's standing, however, came under serious threat when her elderly father-in-law Wang Din-shin, in his 90s, challenged her claim to his late son's fortune.

Wang Din-shin said he was the sole beneficiary of Teddy Wang's estate based on a 1968 will.

He questioned the will Nina Wang produced, which was dated just a month before her husband disappeared and left her everything. All four documents in the will contained the handwritten message, "one life, one love."

After a 171-day trial - during which Wang Din-shin showed pictures of Nina Wang with an alleged lover - a Hong Kong judge ruled in November 2002 Nina Wang's will was fake and that Wang "probably" forged part of it.

The love messages, written in English on documents that were otherwise in Chinese, seemed suspiciously out of place, the judge said at the time.

Prosecutors, however, charged her with forgery in a separate criminal case in 2005. She was released on bail of 55 million Hong Kong dollars (US$7 million; EUR5.3 million), a record for Hong Kong at the time.

In 2005, Hong Kong's Court of Final Appeal reversed the ruling that gave Teddy Wang's estate to his father.

Wang was also cleared of forgery charges in December 2005.

Martin Lee, a prominent lawyer and lawmaker, recalled Nina Wang as a careful spender and described Nina and Teddy Wang as a genuinely loving couple.

"They didn't just go on vacation together, work together. I believe they spent every day together," Lee told reporters.