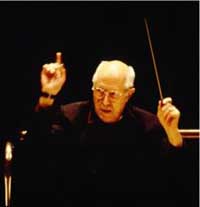 "In all your life and creative work you have many times shown the truth that art and morality together supplement each other and constitute a single goal. In all of the world you are known not only as a brilliant cellist and gifted conductor but as a confirmed defender of human rights and freedom of spirit and an uncompromising fighter for the ideals of democracy," Putin said in a statement.

Putin and Rostropovich were to meet Tuesday evening at a Kremlin reception. Celebrations of the renowned artist's birthday come amid concern over his health; he was hospitalized in February for illness that his aides did not specify, but Russian news media reported he had been in the country's leading cancer hospital.

One of the giants of classical music, Rostropovich went into exile from the Soviet Union with his family in 1974 after housing dissident writer Alexander Solzhenitsyn for four years. He and his wife Galina Vishnyevskaya eventually lost their Soviet citizenship.

The government newspaper Rossiiskaya Gazeta on Tuesday published an article by Solzhenitzyn's wife Natalia that included what she said was the first publication of a letter her husband wrote in May 1973 when they moved out of Rostropovich's house.

"Once more I repeat to you and Galiya my delight at your steadfastness, with which you endured all the oppression connected with me and did not allow me to feel. Once again I am grateful for the years of shelter with you, where I survived a time that was very stormy for me, but thanks to the exceptional circumstances I all the same wrote without interruption," the letter says in part, reports AP.

The Kremlin has not released details of the reception planned for Rostropovich, but the ITAR-Tass news agency reported the guests would include Azerbaijan's president Ilham Aliyev.

Rostropovich was born in Baku, the capital of Azerbaijan, which was then a Soviet republic. He and his wife started a foundation that conducts charitable activities in Azerbaijan including vaccinating children.