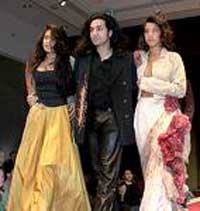 Alexander, 33, has been in jail on $1.3 million bail since March 6. His arraignment was scheduled for April 4.

His attorney, Ronald Richards, has denied the allegations.

Alexander was arrested at his Beverly Hills apartment after a woman alleged that he raped her. Authorities said additional evidence led them to the other alleged victims, including a teenage girl.

Along with forcible rape, lewd acts on a child and other felony counts, prosecutors have charged a special circumstance allegation of multiple victims. If convicted, the 33-year-old could face life in prison.

Considered an up-and-coming designer in the fashion world, Alexander launched his fashion line in 1999 after graduating from the Parsons School of Design in New York. He has dressed celebrities including Paris Hilton, Michelle Rodriguez and Mary J. Blige, reports AP.

This year, Newsweek named Alexander a person to watch. The magazine cited their plans to launch a high-end jeans line and an upcoming reality show on VH1. He has also made several appearances on "America's Next Top Model."