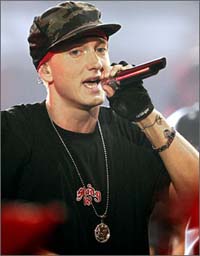 The deal encompasses tracks on Eminem's multi-platinum, 2005 greatest hits collection "Curtain Call," the 2006 Shady Records album "Eminem Presents: The Re-Up," songs co-written on rapper 50 Cent's "The Massacre" album and the hit song "Smack That," produced by Akon and featuring Eminem. It also includes any new songs he writes and a joint venture with the rapper's Shady Music Publishing that allows the rapper and manager Paul Rosenberg to sign other artists and writers, reports AP.

Eminem, who starred in the 2002 film "8 Mile" based loosely on his own life, has won nine Grammys, including best rap album for "The Slim Shady LP," "The Marshall Mathers LP" and "The Eminem Show." He won an Oscar for the song "Lose Yourself" from the "8 Mile" soundtrack.