Fortune tellers say the Chinese zodiac's year of the pig, which starts Sunday, will be a good time to have a baby - but they also warn of rising epidemics, disasters and violence around the world. 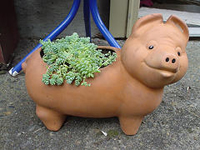 "The Year of the Pig will not be very peaceful," said Hong Kong feng shui master Raymond Lo. Feng shui is the ancient Chinese practice of trying to achieve health, harmony and prosperity by using specific dates, numbers, building design and the placement of objects.

Pig years can be turbulent because they are dominated by fire and water - two of the five elements that Chinese mystics say are the basis of the universe, Lo said. Fire and water are conflicting elements and tend to whip up trouble, he said.

"Fire sitting on water is a symbol of conflict and skirmish," he said. "We'll also see more fire disasters and bombings."

Malaysian feng shui master Lillian Too agreed there was trouble ahead.

"I wish I could say that there won't be natural disasters, but I am afraid it could be as bad as last year," she said.

"There could be epidemics," she said. "I am very worried about bird flu. Eat healthy foods and take care of your health."

In the Philippines, ethnic Chinese started partying early. Hundreds poured into the streets before dawn Friday in Manila's bustling Chinatown, celebrating with dragon dances and fireworks.

The pig is the last of the 12 animals in the Chinese zodiac. Legend has it that the pig finished last in a race to determine the order.

Despite losing, the animal symbolizes good luck - which inspires many Chinese to have children in a pig year.

"Any children born in the Year of Pig will receive help from others throughout their lives," Lo said.

The Russian AK-47 rifle - one of the world's most widespread weapons - was invented during a pig year, Lo said.

"So it will not be surprising to see more gunbattles, murder with guns and bombing attacks in 2007," he said.

Last year, Hong Kong soothsayer Alion Yeo accurately predicted that the North Korean nuclear crisis would worsen during the Year of the Dog. This year, Yeo is predicting that the reclusive communist nation will undergo a power struggle that will bring leadership changes around May.

Singapore fortune teller John Lok predicted that the Iraq situation will not settle, that U.S. President George W. Bush will have a bad year and that France's next president may be a woman.

Most soothsayers said the world economy will keep booming, though people should be invest cautiously.

"Because of the water element in the Year of the Pig, the economy will continue to grow, which also paves the way for another round of interest rate hikes," said Peter So, a celebrity fortune teller in Hong Kong.

The Year of the Pig has to be celebrated with special sensitivity in Southeast Asian nations such as Malaysia and Indonesia, whose large Muslim populations consider pigs unclean and offensive.

Indonesia, the world's most populous Islamic nation, has launched special postage stamps to mark the Lunar New Year for the first time.

But concerns over the sensitivities led the postal service to drop plans for a large pig image on the stamps.

Instead, it chose a picture of a Chinese temple surrounded by tiny likenesses of all 12 Chinese zodiac animals, said Hana Suryana, director of the country's postal service, PT Pos Indonesia.

"We took the middle path," he said, adding that the decision was made after discussions with Muslim and Chinese leaders.

Ethnic Chinese make up about 5 percent of Indonesia's population of 220 million. Under the dictatorship of Gen. Suharto, which ended in 1998, the Chinese were subject to state discrimination and were prevented from celebrating the Lunar New Year, the AP reports.

"That has changed now, but we still feel uncomfortable celebrating the day in a large way because there are some people who cannot accept that Chinese culture is a part of Indonesian culture," said Jhony Tan, a trader in Jakarta's Chinatown, which was decked with banners and bustling with shoppers.

Yusri Mohammad, president of the Muslim Youth Movement of Malaysia, said he had no problem with the Chinese celebrating the pig year in his country.

Decorative pictures of pigs in shopping malls are fine, as long as Chinese don't start using live pigs or eat pork in public, he said.

"The Year of the Pig is just a symbolic concept," he said. "We shouldn't feel negative about it as long as the celebrations take into account Muslim sensitivities."