In New Jersey, bears fall out of trees

The last thing Lorraine Grossman expected to see as she gazed out the kitchen window of her daughter's home was a 211-pound (95-kilogram) bear. 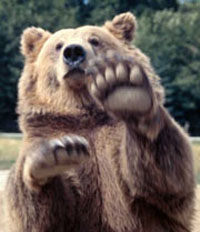 In New Jersey, bears fall out of trees

"I was making a pot of coffee, and I turned around and there he was in the window looking at me," said Grossman. "For a minute I didn't realize there was a glass between him and me."

The scream Grossman let out was loud enough to startle the wandering bear, who turned tail and scurried some 40 feet (12 meters) up a tree.

More than 50 neighbors gathered to watch and the beast soon grew tired. As the bear gave a lazy yawn, the crowd cooed loudly in appreciation.

The bear remained wedged in a web of branches until it was shot with a tranquilizer dart Sunday. The bear hung on for 10 minutes before dropping neatly into a taut net set up below.

The bear, a male estimated to be 2 or 3 years old, was released at a state wildlife-management area.

"It's not something you get to see every day," said Pete Samek, who hoisted his 5-year-old daughter, Lucy Rose, on his shoulders. "Bears falling out of trees."