British glam rocker Gary Glitter, who was convicted of molesting two girls in southern Vietnam, may get his three-year prison term reduced next week as part of a nationwide Lunar New Year prison amnesty, a court official said Friday. 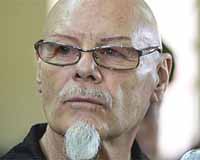 A panel of three Vietnamese judges will decide on Feb. 7 whether to reduce Glitter's sentence, which is set to expire in November 2008, said Tran Thi Thien Huong, a judge in Binh Thuan province, where Glitter is being held.

Under Vietnamese law, Glitter's sentence cannot be reduced by more than 18 months, and the earliest he can be released is late May, unless the president intervenes.

Vietnamese prison officials recommended to the judges this week that Glitter's sentence be reduced by just three months.

"Glitter is an old man, and he is not in good health," Kinh said. "And he has paid compensation to the victims as required by the court."

Glitter, whose real name is Paul Francis Gadd, was arrested in November 2005 in the southern city of Vung Tau, where he had been living for about six months. He was convicted in March 2006 of committing "obscene acts with children" and sentenced to three years in prison, including time already served.

Glitter hit his musical peak in the 1970s, but his crowd-pleasing anthem "Rock and Roll (Part 2)" is still played at sporting events, reports AP.

He was convicted in Britain in 1999 of possessing child pornography, and served half of a four-month jail term.

He later went to Cambodia but was expelled from that country in 2002. Cambodian officials did not specify a crime or file charges against him.