A psychologist told a court he was behaving within the guidelines of the Australian Psychological Society when he told a young woman patient to wear a dog collar and call him "master." 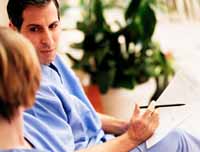 Bruce Beaton, 64, has pleaded not guilty in the Western Australia state District Court in the state capital Perth to sexually assaulting the 22-year-old woman he was treating for bulimia at his clinic in the neighboring city of Fremantle between January and March 2005.

Beaton told the court he had resorted to drastic treatment because gentle methods were not working.

He said he thought role playing a master/submissive relationship would help build a more trusting relationship so he made her wear a dog collar, call him "master" and he cracked a whip in treatment sessions.

He said such treatment was allowed by Australia's largest professional association for psychologists.

"It is right within the ethical guidelines," Beaton told the court.

Beaton was arrested when police raided his office in March 2005 after hearing whipping sounds while they secretly video-recorded one of his sessions through a camera hidden in the patient's bag.

The jury has watched the tape on which Beaton is heard calling the woman, who cannot be named for legal reasons, his "delicious" submissive and she calls him "master."

She is seen wearing a dog collar and heard swearing an oath to offer her body to him in order "to become a better person."

Beaton produces a pink cat-o'-nine tails a whip with line lashes which is heard, but not seen, cracking 12 times before police intervene.

Beaton denied ever whipping his patient. The woman, now aged 24, told the court last week that he had repeatedly whipped her and that the lashes had stung like rose thorns.

She said she was often told to take her clothes off during therapy sessions, and when she refused to remove her underwear, she was beaten with a wire coat hanger, reports AP.

Prosecutor Amanda Forrester told the court the woman complained to police the day after being forced to lie naked on a couch in his clinic while he sexually assaulted her.

The trial continues. The maximum penalty Beaton faces was not immediately clear.