Everest conqueror and Antarctic explorer Sir Edmund Hillary has returned to the frozen continent at age 87 for what he believes will be his last time. 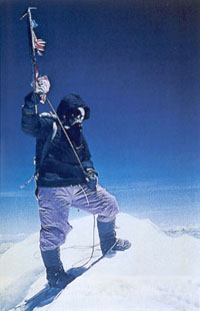 Hillary joined New Zealand Prime Minister Helen Clark and other dignitaries who flew to Antarctica to mark the 50th anniversary of the Scott Base, which the adventurer helped build in 1957.

"This is probably the last opportunity that I will get to visit the wintery south," Hillary said Friday, the day after he arrived.

Hillary helped lead a team from the British Commonwealth who drove across Antarctica to the South Pole in 1955, carving a new path to the Earth's magnetic southernmost point.

"I was always prepared to come back one more time," said Hillary, whose comments were reported by New Zealand media traveling with the anniversary delegation. "I don't think it'll ever happen again, but this is a marvelous return."

Hillary criticized Japan for its policies allowing whaling for scientific purposes, and for pushing for the international ban on commercial hunting to be lifted.

The Japanese whale hunting season began recently in waters at the far south of the world, reports AP.

"They just don't seem to have accepted that these creatures, wonderful creatures that they are, should be carefully protected," Hillary said.

Japan and other pro-whaling nations have been pushing the International Whaling Commission to revoke the 1986 ban on commercial hunts amid controversy over exactly how many whales are left in the world's oceans.

At an international meeting last June, pro-whaling nations passed a symbolic resolution to support ending the moratorium, though officially ending the ban would require a 75 percent majority among commission members.