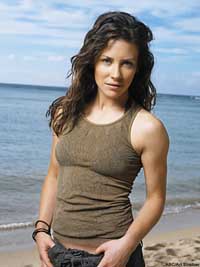 Lilly, who plays Kate on ABC television's hit drama, and her two female roommates were not home when the fire broke out early Wednesday.

"Unfortunately, it is true that the home she rented in Hawaii did burn down this morning," Lilly's publicist Cara Tripicchio said in an e-mail. "Evangeline was on set already when the fire occurred and luckily, her roommates were not in the house either.

"Everyone is thankfully safe."

Lilly's single-story Iana Street house is located in coastal community of Kailua near the Mid-Pacific Country Club. About 30 firefighters responded to the 6:43 a.m. call and conducted two searches of the home for any occupants.

"We stopped the fire from spreading," he said. "It took us maybe 15 to 20 minutes to knock down the main body of fire."

Fire investigators were trying to determine the cause of the blaze and a damage estimate. Tejada said it is not unusual for a fire to start with no occupants at home, reports AP.

"The only thing standing was the roof and a couple of the interior walls. Most of the contents had been destroyed," Tejada said. "The home was pretty much destroyed and uninhabitable."

Filming for "Lost" was scheduled to break for the holidays at the end of the week.