A federal judge has refused to block the upcoming release of "Alpha Dog," a movie based on the Jesse James Hollywood murder case. 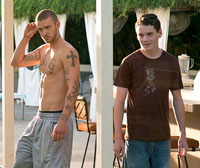 The film, which was shown at the Sundance Film Festival and stars Bruce Willis, Sharon Stone and Justin Timberlake, is scheduled to be released Jan. 12. The characters' names have been changed.

U.S. District Judge Gary Klausner saw the movie this week before rejecting Hollywood's request for a preliminary injunction, Blatt said Wednesday. The attorney said he will seek an appeal.

Prosecutors say Hollywood was the mastermind behind the August 2000 kidnapping and murder of 15-year-old Nicholas Markowitz.

Hollywood's lawyer sought to prevent the movie's release until his client's death penalty case is over. Defense attorney James Blatt argued the movie portrays his client in a bad light and could taint the jury pool, infringing on Hollywood's right to a fair trial.

Prosecutors say Markowitz was abducted as part of a feud Hollywood had with the victim's older half brother over a drug debt. The teen's body was found in a remote Santa Barbara County camping area.

Hollywood fled after being charged with murder and was captured in Brazil last year. He has pleaded not guilty to the charges and could face the death penalty if convicted. Four others have been convicted in connection with the murder.