The long-running legal battle over snatched photos from the wedding of Michael Douglas and Catherine Zeta-Jones was going to Britain's highest court Monday. 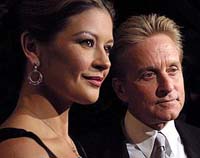 Judges in the House of Lords were sitting to decide whether celebrity magazine OK! is entitled to compensation from rival Hello!, which published secretly snapped pictures of the couple's November 2000 nuptials.

OK! had had an exclusive contract with the Hollywood couple to cover their lavish wedding at New York's Plaza Hotel. It sued Hello! after the rival publication ran its own pictures of the event.

A High Court judge ruled in favor of OK! in November 2003, ordering Hello! to pay costs and damages of more than 2 million pounds (US$3.8 million, Ђ2.8 million).

Hello! appealed, arguing that it had run its own wedding pictures as a "spoiler" to its rival's coverage a common practice in journalism.

Last year, the Court of Appeal agreed, dismissing OK!'s claim that its rival's spoiler had unlawfully interfered with its business. The judges overturned the costs and damages ruling and ordered OK! to pay back the money it had received.

A panel of Law Lords judges who sit in the House of Lords and make up the country's highest court were due to hear OK!'s challenge to that ruling starting Monday.

Douglas and Zeta-Jones, who received 14,600 pounds (US$28,000, Ђ22,000) in damages from Hello! after the original trial, are not expected to be in court for the weeklong hearing, reports AP.

During a dramatic six-week hearing at the High Court in 2003, Zeta-Jones said she had felt "violated" when Hello! published its "sleazy and unflattering" pictures.

She singled out an image that showed Douglas feeding her wedding cake, saying "I don't usually like my husband shoving a spoon down my throat to be photographed."