Malawian judge postpones hearing on Madonna adoption to next week

A High Court judge on Monday postponed his ruling on a challenge to Madonna's plans to adopt a Malawian baby until next week, court officials and lawyers said. 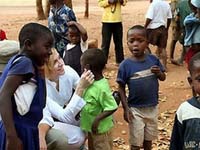 Malawian judge postpones hearing on Madonna adoption to next week

Judge Andrew Nyirenda was unavailable to give his ruling as he was attending a conference, Lilongwe High Court registrar Ken Manda said.

Manda said the ruling was now expected Monday or Tuesday next week.

Nyirenda was to rule on a petition by a coalition of 67 human rights and child advocacy groups into the adoption process and to make them party to the assessment of the pop singer's fitness as a mother.

Nyirenda on Oct. 12 granted Madonna and her filmmaker husband Guy Ritchie an "interim order" allowing them to take away 14-month-old David.

The rights groups argue that government cut legal corners to "fast-track" the adoption because of Madonna's celebrity status.

"Malawi laws are clear that international adoptions are prohibited and that adoptive parents have to be resident in Malawi during the period of assessment," said Maxwell Matewere, Executive Director of Eye of the Child a child rights advocacy group that is part of the coalition.

But Alan Chinula, the singer's Malawian lawyer, described the laws as "archaic, impractical and unrealistic."

"As far as we are concerned the Ritchies followed Malawian laws to the letter," he said.

Yohane Banda, the 32-year-old biological father of David, has said he wants the boy to stay with Madonna, reports AP.

Banda surrendered the child to an orphanage after his wife of 10 years, Marita, died last year after giving birth to David. The couple had two other sons but both died in infancy from malaria.

Banda remarried on Friday to Flora Kamanga, 22, who is three months pregnant.