Anna Nicole Smith is house-hunting again in the Bahamas, where a former boyfriend is seeking to remove her from a waterfront home where she has taken refuge since her son's death. 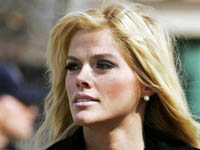 The reality TV star and her companion Howard K. Stern are considering homes on the islands of Eleuthera, Grand Bahama and elsewhere in the archipelago, Smith attorney Wayne Munroe said Monday.

Smith, who gave birth to a daughter in the Bahamas, used the house in Nassau as the basis for her application for permanent residency. The home has been the subject of an ownership dispute between her and a South Carolina businessman.

If a court rules against her in the dispute, Munroe said Smith wants to make sure she can meet the condition of owning a home worth at least US$500,000 (Ђ389,710) needed to maintain permanent residency in the Bahamas.

"What is involved now is a leisurely look at other houses," Munroe said.

Stern recently looked at a property on Eleuthera. The couple is considering homes on other islands, but it has been difficult for the 38-year-old former Playboy Playmate to travel because she is caring for her 2-month-old daughter, Munroe said.

Smith's former boyfriend G. Ben Thompson, a South Carolina businessman who claims Smith has not honored an agreement to pay the mortgage on the Nassau house, escalated their feud on Friday by having the power cut off at the home known as "Horizons." The electric utility restored power within hours and is reviewing Thompson's request, Munroe said.

Thompson's Bahamian attorney, Emerick Knowles, said the tactic was warranted because Smith has refused multiple requests to vacate the property.

"Mr. Thompson is the owner of the property and it is being unlawfully occupied by Ms. Anna Nicole Smith," Knowles said.

Munroe criticized the measure as a mean-spirited stunt.

"They're trying shenanigans that are totally inappropriate with a woman at home with a newborn child," he said. "Nobody seems to have any regard for this child."

Smith said she was seeking privacy when she came to the Bahamas in July, and gave birth to a baby girl on Sept. 7.

Three days later, Smith's 20-year-old son Daniel died while visiting his mother in the hospital. A private medical examiner said he died from a combination of methadone and antidepressants. Results of an official autopsy and a police investigation have not been released, reports AP.

Another former boyfriend, Larry Birkhead, claims to be the father of Smith's daughter and has filed a paternity suit in Los Angeles.