The billionaire software engineer who is scheduled to be the next space tourist said he's been interested in space since before the launch of Sputnik, but the biggest dream of his youth was escaping to freedom from behind the Iron Curtain. 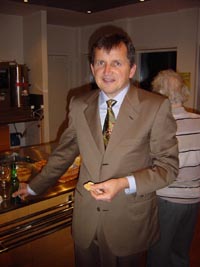 Charles Simonyi, 58, left Hungary at 17, roughly a decade after the Soviet Union launched the Space Age by sending Sputnik, the first man-made satellite, into orbit. He came to the United States to study engineering and computer science, and went on to help develop two of the world's most popular software applications, Microsoft Corp.'s Word and Excel.

"Of course Dr. Simonyi has been successful in a much larger way on Earth than we've been in space," said Eric Anderson, president and CEO of Space Adventures, Ltd., the Vienna, Virginia, company that Simonyi is paying to take him to the International Space Station on March 9, 2007, aboard a Russian Soyuz spacecraft.

Simonyi, whose net worth is estimated at $1 billion (Ђ790 million) in this year's Forbes magazine rankings of the richest Americans, is paying $20 million to $25 million (Ђ16 million to Ђ20 million) to be the company's fifth space tourist. He was reticent to discuss the cost of his adventure, although he and Anderson both mused about the way things like computers and presumably space flight get cheaper with time.

"The first laser printer I worked with cost half a million dollars," Simonyi said, noting that the previously rare machines now sell for a few hundred dollars and can be found in most offices and many homes.

Anderson predicted that in another decade or two, it could cost a couple hundred thousand dollars to be a space tourist, as soon as reusable rockets are developed.

Simonyi worked for Xerox Corp. in California for eight years before moving in 1981 to Microsoft, which he left to found Intentional Software Corp. in 2002 in nearby Bellevue.

He said he felt like he was making a contribution to the future of civilian space flight, helping with space research and encouraging kids to get interested in space science.

His own interest in space as a child helped him learn English some of his first English words were "propellant" and "nozzle" and his knowledge of space trivia led to victory at age 13 in a junior astronaut contest, for which he won a trip to Moscow and a chance to meet one of the first cosmonauts, Pavel Popovich. Simonyi emphasized, however, that he was always more interested in freedom than space.

"I was a very realistic person. I was already learning English. I was on my way out," he said, adding that the trip to Moscow was interesting, but "My dream was to get out of Hungary and be free."

Simonyi described his physical and mental training for space flight as being vigorous and energizing. He said he has enjoyed meeting both American astronauts and Russian cosmonauts, although he hadn't yet worked with the two cosmonauts he would join in the rocket to orbit.

Although he will be helping with science experiments and some menial tasks aboard the space station, Simonyi said he will be spending a lot of time just hanging out, observing, taking pictures and looking out the window.

He didn't think his work as a software engineer or his experience as a pilot was likely to come in handy on the space station.

"I'm part of a team and I will do what the commander asks me to do," Simonyi said, sharing with boyish enthusiasm his hope that he will learn enough during his training to be trusted with important tasks such as drying out the space suits, which apparently are soaked with sweat during the two-day flight from Earth to the station.

His previous life experiences especially his understanding of computers and his Russian lessons from school have come in handy during his training. Simonyi noted that the training materials were written in both English and Russian.

Simonyi will be blogging about his adventure on a Web site designed to appeal to younger space enthusiasts and adults who wish they could be flying to the space station with him. He's already written chatty descriptions for the photos from his training at the Yuri Gagarin Cosmonaut Training Center in Star City, Russia, reports AP.

"I want to share all that I learn with everybody, especially with kids," he said.

Simonyi said his friend and former colleague, Microsoft co-founder Paul Allen, who is making his own contributions to space tourism by investing in research to build civilian spacecraft, was not envious of his trip into space.

"He's very happy. He was one of the first people I told about my decision," Simonyi said.

Simonyi called himself a lucky man.

"This is going to be a great six months," he said.