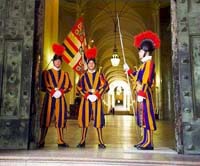 Emma Fattorini, a contemporary history professor at Rome's La Sapienza University, wrote about her findings in Sunday's edition of Il Sole-24 Ore, Italy's main business daily. She said Pius had shared his nocturnal musings with Cardinal Eugenio Pacelli, his secretary of state who would succeed him as wartime pontiff Pius XII.

Pacelli kept nearly daily notes of his conversations with Pius XI, Vatican officials have said. On Nov. 6, 1937, Pacelli noted that the thought "came to (the mind) of the Holy Father during a sleepless, but calm and relaxing night,"' according to Fattorini.

According to the historian, Pacelli wrote that Pius XI was pondering what was known as the "main tendue" French for the extended hand a phrase used by French communist leader Maurice Thorez in 1936 in an overture to French Catholics.

The document provides more insight into how Pius, who early in his pontificate considered far-right regimes a bulwark against liberal secularism and communism, was experiencing a change of heart as the dangers of fascism and Nazism became more apparent, Fattorini contended in an interview with The Associated Press.

"It's not that he suddenly became pro-communist," she said. "He remained a conservative, but there are signs that show he was taking a very open stance."

In her article, Fattorini cites Pacelli as summarizing Pius XI's thoughts this way: "`You take the hand that we extend to you, and we extend ours to you, and we ask you to accept it ... No ideological mixing or confusion ... no compromise on the principles that all the world knows and recognizes about the Catholic church, but to do well by you."'

Thorez had said in a radio broadcast that the French secular government was extending a hand to Catholic workers. Given Thorez's strong ties with the Soviet Union, Pius initially dismissed the appeal, but "after this meditation he changed his mind, deciding to take that hand for the common good," Fattorini said.