Brad Pitt, ever the social activist, says he won't be marrying Angelina Jolie until the restrictions on who can marry whom are dropped. 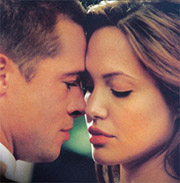 "Angie and I will consider tying the knot when everyone else in the country who wants to be married is legally able," the 42-year-old actor reveals in Esquire magazine's October issue, on newsstands Sept. 19.

In the article he reflects on "fifteen things I think everyone should know."

Though Shiloh, the world-famous daughter of Pitt and girlfriend/earth mother Angelina Jolie, hogged much attention upon her birth in May, Pitt says he "cannot imagine life" without adopted children, Maddox, 5, and Zahara, 1.

"They're as much of my blood as any natural born, and I'm theirs," says Pitt. "That's all I can say about it. I can't live without them. So: Anyone considering (adoption), that's my vote."

Pitt, who plays a world traveler in the upcoming drama "Babel," subscribes to a laid-back parenting style, reports AP.

"I try not to stifle them in any way," he says. "If it's not hurting anyone, I want them to be able to explore. Sometimes that means they're quite rambunctious."

"I feel it's really important to have that time to sit and talk to them," he continues. "I really like that last minute before they fade off. And always give them a heads-up before you jerk them out of something. You need to tell them, like, `You have three more minutes."'