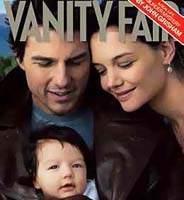 Last night's broadcast of CBS Evening News with Katie Couric marked the first time images of Suri, the daughter of Cruise, 44, and his fiancée, Holmes, 27, have been made public since her birth in Los Angeles on April 18 -— ending months of speculation about the celebrity baby. The shots were taken by famed photographer Annie Leibowitz and will appear in print in the magazine, available today.

Jane Sarkin, Vanity Fair's features editor, chatted with The Early Show co-anchor Rene Syler this morning about the five days she spent with the celebrity couple for the exclusive Annie Leibowitz shoot which took place at Cruise's Telluride, Colo. compound in July. She revealed that the couple was very open throughout the photo shoot and that their wedding is imminent.

"It was incredible," said Sarkin. "It was an open experience. They let us go wherever we wanted. We shot whatever we wanted. We were there for five days. Annie Leibowitz and I did everything together. And it was a really incredible experience for us. Tom has never allowed anyone into his private world like that and I don't think he ever will again."

Cruise has two other children, Isabella and Connor, with his ex-wife, actress Nicole Kidman. Holmes, however, seems to be relishing her new role as mom.

"She is such a hands-on mother. They have very little help in the house, which was another thing that was incredible," said Sarkin. "But she does everything with that baby. Actually, Connor and Bella, Tom's children, are so helpful as well. They all chip in. Vanity Fair was so excited to be there," according to CBC News.

Suri was born after months of nonstop publicity generated by the courtship of Cruise and Holmes, which burst into the open in May 2005 when the actor giddily professed his love for the actress during a notorious couch-hopping appearance on "The Oprah Winfrey Show."

A month later, Cruise announced he had proposed marriage to Holmes at the Eiffel Tower in Paris, which was followed later by Cruise's statement that his fiancee had embraced his faith in the Church of Scientology.