Tom Cruise has taken the impending birth of his first child with fiancee Katie Holmes to another level. 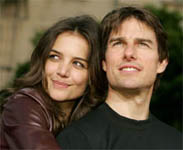 "We've been doing seminars with the family just to educate them," the 43-year-old star of the upcoming "Mission: Impossible III" film tells GQ magazine in its May issue, on newsstands April 25.

"Running seminars so we can understand what Kate's going through, and for Kate to understand it. Things like how to take care of a pregnant woman and get ready for the birth.

"It's just kind of becoming a fun game of learning. We've also been studying what happens after the birth and how to take care of the baby", reports AP.

According to National Ledger, the fabulous Katie Holmes spends a lot of time without her boyfriend Tom Cruise. Even when she finally emerged from the Cruise compound last week to do some shopping, Tom was no where in sight.

So how do they keep in touch, in case Katie ever goes into labor? The pair uses text messages to note what they call "baby action."

And it's a good thing they have it.

He flies to Germany without her, takes weekend off to fly his plane in LA without her and even though she's well enough to shop for hours at Barney's in Beverly Hills, she didn't accompany him to his interview with Sawyer.

So - in this case - the blackberry serves like a baby beeper.