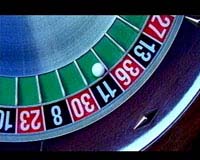 The name and personal details of Friday's jackpot winner were not released.

The paper gave no details on the Belgian and traditionally the lottery does not release information about winners for security reasons.