Man who signs name as "God" may have to surrender license

A man who signs his name as "God" may have to surrender his driver's license. 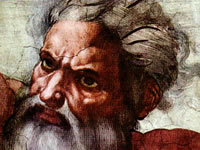 Man who signs name as "God" may have to surrender license

The Pennsylvania Department of Transportation told Paul Sewell in a letter Tuesday that he would have to turn over the license if he didn't provide his birth certificate and Social Security card to the agency by Feb. 14.

The letter came less than a week after the Berks County Elections Board questioned Sewell's "God" signature on a voter registration form.

Sewell on Friday asked a Berks County court to intervene in the PennDOT matter. The department does not cite a reason in the letter and a spokeswoman declined comment.

Sewell, a self-employed bond enforcement agent, has said he signs official documents as "God" because fugitives always preface their comments with "Oh, God," when he captures them. He said his co-workers thought that was funny and took to calling him God.

In his appeal to the court, he said "I do not know why they are canceling my driver's license that I have had at age 16. Now I am 40."