George W. Bush, who saw Putin's soul in 2001, says what US attitude to Russia should be like

Former US President George W. Bush said in an interview with Fox News that Vladimir Putin was an intelligent tactician, and relations with him must be forceful. 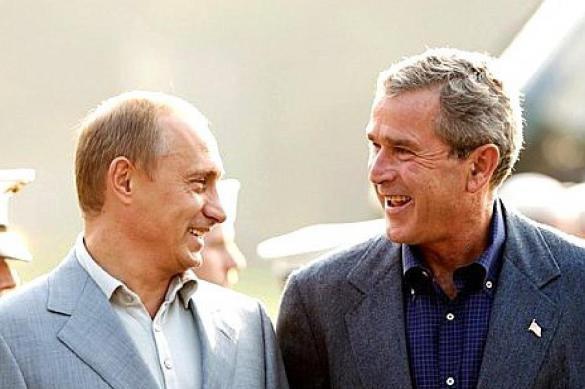 Bush said that he managed to "see a soul" when he looked Putin in the eye, but that was during the time when Russia was broke. These days, Bush added, Putin has changed and turned into a very aggressive person, whose ultimate goal is to reinstate Soviet influence. "His attitude on most issues is: "I'm going to win and US is going to lose," Bush said.

"Therefore, I always believed that it is important for the United States to be forceful when dealing with Putin, not belligerent, but forceful. He is good," the former US president said.

When speaking about Putin's popularity in Russia, George W. Bush said that he would have been popular in the USA too if he had owned a major television network. Bush believes that Putin is very strong inside Russia, even though the Russian economy is not strong enough and the demographics is not that positive.

In 2001, George W. Bush said the following about Putin: "I looked the man in the eye. I found him to be very straight forward and trustworthy and we had a very good dialogue. I was able to get a sense of his soul. He's a man deeply committed to his country and the best interests of his country and I appreciate very much the frank dialogue and that's the beginning of a very constructive relationship."