Plastic surgery causes too much trouble for Chinese women at airports

Three Chinese women could not return home from South Korea where they went for plastic surgery. Customs officers at the airport could not identify the women and were forced to detain them for clarifications, Shanghaiist reports. The photo of three Chinese women with swollen faces and passports in their hands has gone viral on the Internet. 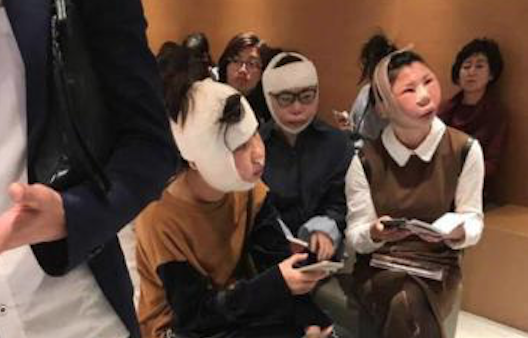 The women went to South Korea for plastic surgery during the autumn Golden Week - China's main public holiday - the 68th anniversary of the founding of the People's Republic of China.

Plastic surgery in South Korea is relatively cheap, and many people from China go to the country to improve their looks.

Post-surgery swelling and bandages put the three women in a difficult situation during passport control, when South Korean officers could not identify the women by their IDs. The women had nothing to do but to wait for their proper identification.

In South Korea, plastic surgery has ben extremely popular lately. Many foreigners, especially from China, fly to South Korea specifically for plastic surgery. Incidents at airports, when border guards do not let Chinese citizens through due to their new appearance, happen very often. The latest incident received extensive media coverage because of a viral photo that many found comic.

Swelling after facial plastic surgery, in particular rhinoplasty, is an inevitable element of the postoperative period, which also includes bandages, bruises and the need to breathe through the mouth.