The family of three-year-old boy Omran Daqneesh, whom the Western media dubbed as "a symbol of Aleppo's suffering," have announced their support for Syrian President Bashar Assad. 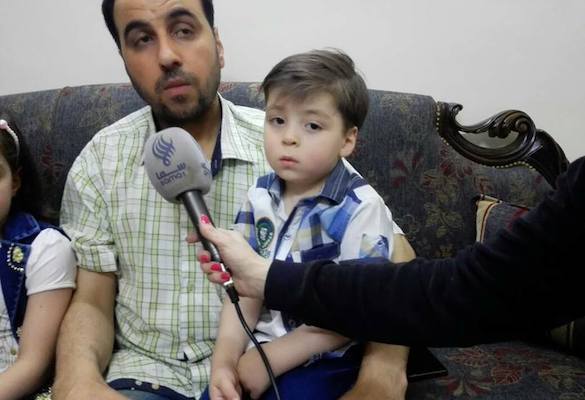 According to reporters of Lebanese and Syrian television channels, who interviewed the child's parents, Omran's relatives are not going to leave Aleppo, where they returned after the liberation of the city, The Telegraph wrote.

In the interview, the boy's father, who had previously refused from talking to journalists, stated that the media wanted to "sell his son's suffering" and use the child to attack the government of Bashar Assad.

The photo of Omran Daqneesh appeared on the Internet in the summer of 2016. The boy was rescued from the under the rubble of his family's destroyed home. Western mass media outlets immediately accused Russia and Syria of the air raid on the boy's home in Aleppo. Moscow and Damascus strongly refuted the accusations. Officials with the Russian Defense Ministry said that the video from the site of the tragedy indicated the use of a mine or a gas cylinder that terrorists use against the Syrian army and civilians.

The picture of the boy all covered with dust and blood stains, staring with an empty look in front of him, went viral on the Internet.

The Ministry of Defense of Russia indicated that the nature of the damage recorded on the video from the site of the tragedy indicates the use of a mine or gas cylinder that members of terrorist groups use against the army and civilians.

Daqneesh was rescued with his parents and three siblings, then aged one, six, and ten. His 10-year-old brother, Ali, died on August 20, 2016, of his injuries. The apartment building collapsed shortly after the family was rescued. Eight people died in the air strike, including five children.