Notorious performance artist Pyotr Pavlensky will have to pay a fine of 500,000 rubles ($7,700) for setting fire to the door of the Federal Security Bureau building, a Moscow court ruled. 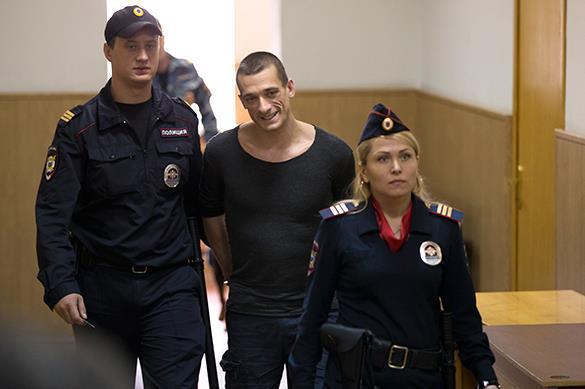 Pavlensky was accused of setting fire to the door of the FSB building in Lubyanka in Moscow. He was detained in November 2015 after he committed the act in the presence of journalists.

According to the judge, the amount of the original fine was set on the level of 1.5 million rubles ($23,000), but it was later reduced to 500,000 rubles as the defendant was staying in custody during preliminary investigation.

The artist was released after the sentence, RIA Novosti reports. He told reporters that the outcome of the trail was of no importance to him.

In November 2015, Pavlensky doused one of the doors of the FSB building in Lubyanka with gasoline and set it on fire. At first, Pavlensky was accused of vandalism, but the case was later reclassified as "destruction of objects of cultural heritage."

Pavlensky is known for his outrageous acts that he calls artistic. In some of such acts, he would stitch up his mouth, wind barbed wire around himself in front of the building of the Legislative Assembly of St. Petersburg. During his most infamous acts, Pavlensky nailed his scrotum to the stone pavement on Red Square and cut off a piece of his ear sitting on the fence of the Institute of Psychiatry (he performed the last two acts naked).