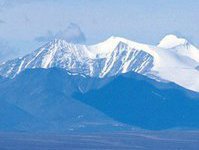 According to the reporter, the MPs called the US-based company that organized their tour to Antarctica. It was also said that the deputies managed to climb to the peak of Vinson Massif, which they were eager to conquer.

When Sidyakin and Savchenko stopped communicating, spokesman for Alexander Sidyakin, Pavel Sklyanchuk, wrote that the contact with the MPs had been lost.

The chief of the Russian Antarctic Expedition, Valery Lukin, said that according to provisions of the law regulating activities of Russian citizens and legal entities in the Antarctic, any action of the aforesaid on the continent must be pre-authorized by Roshydromet (the Russian Federal Service for Hydrometeorology and Environmental Monitoring).

"I do not understand how State Duma deputies found themselves in Antarctica. I know for certain that neither legal nor natural person has requested permission to conduct mountain climbing activities in the Antarctic in 2015. They have not addressed to us," Valery Lukin said, RIA Novosti reports.