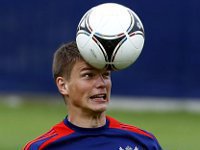 Famous Russian footballer Andrey Arshavin and his ex-wife Julia Baranovskaya entered into a amicable agreement on the case of child support.

On July 7th, the agreement between the former spouses was approved at the magistrate's court of the Primorsky district of St. Petersburg, RIA Novosti reports.

According to the ruling, Arshavin, whose fee in Zenit makes 2.5 million euros per year, will share 50 percent of his earnings with Baranovskaya, provided that the sum will be divided equally between her and their three children. As expected, the money of the children will be kept on special accounts until they come of age.

Arshavin himself, commenting on the news, stated that he would not control the spending of money, because he trusted his ex-wife. "We, together with Julia, are trying to find the best solution for our children," ITAR-TASS quoted the footballer as saying.

The civil marriage of Arshavin and Baranovskaya lasted for nine years. After the footballer left his family, Baranovskaya went to court claiming that, in her opinion, Arshavin was evading child support, lenta.ru reports.