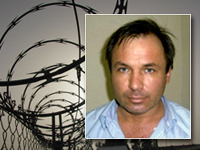 Russian national Konstantin Yaroshenko, who was sentenced in the U.S. to 20 years in prison, has serious health problems. He appealed to President Vladimir Putin asking for help.

Yaroshenko remains in the preinfarction condition. It is expected that it will be delivered from prison to hospital. The Russian complains of pain in the heart  and fears for his life. Lawyer Alexey Tarasov said that Yaroshenko may die if he does not receive treatment.

The Russian sent Putin a request seeking extradition home. "I beg you to address to the American side and personally to U.S. President Barack Obama requesting my earliest arrival home. In Russia, I have my wife, my daughter and 73-year-old mother, whom I have not seen for many years and whom I want to see at least one more time," wrote Yaroshenko.

Konstantin Yaroshenko was sentenced in the U.S. to imprisonment on charges of drug smuggling. In the summer of 2013, the pilot's mother suggested the authorities should exchange her son to Edward Snowden, who received temporary asylum in Russia.