Man, 50, attacked by bear, kills the animal with a knife 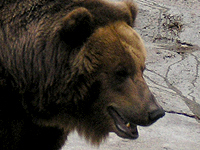 Fifty-year-old resident of Yakutia won the fight with a bear when the animal attacked the man on a pasture.

The man, who comes from the village of Eselyah, went to the field, where his horses were grazing, some 55 kilometers from his home. The bear attacked him while he was walking in the field.

The villager fought back, even though all he had was a knife, and killed the animal.

The man suffered multiple bite and lacerated wounds. He remains at hospital; his condition is stable.