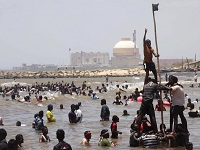 In India, three goats were arrested for causing damage to a police car. The animals climbed on top of the Honda Ascot, which had been bought two days before the incident.

As a result, the surface of the vehicle was scratched, it's windows were broken. Police officers managed to catch only three animals. They were taken to a police station, whereas the owner of the goats was charged with negligent handling of domestic animals.

The police said that the three arrested goats had had a "criminal record" for committing similar crimes.