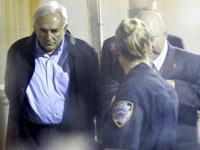 The International Monetary Fund board is seeking to contact its managing director to hear his side of the story, but Dominique Strauss-Kahn sits in a solitary cell at Rikers Island, N.Y., isolated for his own protection, and under a routine suicide watch.

A top international financier, considered the front-runner to become the next president of France, Strauss-Kahn was arrested by New York police at John F. Kennedy Airport as he was about to depart and charged with sexually assaulting a maid at the hotel where he was staying. On Monday, a judge in New York denied bail to Strauss-Kahn on grounds that he is a flight risk, according to .

In his first public comments since taking on the 32-year-old Sofitel maid's case, Jeffrey Shapiro said the trauma she experienced during and after the alleged assault had been "extraordinary".

The maid alleges that when she arrived to clean the IMF managing director's suite at noon on Saturday, he locked her inside, attempted to rape her and forced her to give him oral sex,  says.