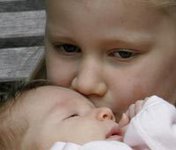 A Romanian woman is the world's youngest grandmother, aged 23, British tabloid The Sun reported. Mother of two, Rifca Stanescu was 12 when she had her first child Maria. A year later she had a son, Nicolae.

Mrs Stanescu was 11 when she married 13-year-old jewellery seller Ionel Stanescu. They eloped because Mrs Stanescu feared her father would want her to marry another man. Mrs Stanescu said she had been forgiven by her family after giving birth to Maria.

The young mother wanted Maria to have a different life and urged her to stay at school, according to Straits Times.

Though marrying young is a way of life in the Romanian gypsy culture, Mrs Stanescu said she wanted more for her daughter.