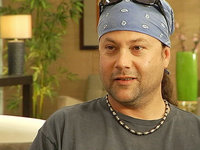 Mike Starr, the original bassist for the band Alice In Chains, was found dead at a home in Utah on Tuesday, March 8th. Starr was 44 years-old.

The musician went public with his addiction struggles and joined season 3 of Celebrity Rehab with Dr. Drew and chronicled his painful withdrawal and road to sobriety.

Starr appears to have hit a bump in the road as he was arrested 3 weeks ago in Salt Lake City for possession of a controlled substance as he allegedly had six Xanax and six Opana tablets on him at the time, Backseat Cuddler reports.

Starr left the band in 1993, and has battled addiction. In a statement, the band said, "Members of Alice in Chains are mourning the loss of their friend and ask that the media respect their privacy -- and the privacy of the Starr family -- during this difficult time. Their thoughts & prayers are with the Starr family," All Access Music Group informs.