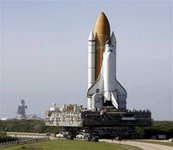 Discovery's launch was picture-perfect for the thousands of spectators who crowded central Florida's beaches, causeways and parks to see a bit of history.

"This was one for the record books," said shuttle-launch director Mike Leinbach, who stressed that the launch team was well-prepared for the stressful time squeeze, having practiced similar scenarios many times, according to Arizona Republic.

"For those watching us today, witness the majesty and power of Discovery as she lifts off one final time," said Discovery's commander, Steve Lindsey, a few minutes before the afternoon launch.

But the day was not without some last-minute drama. Less than half an hour before the 3:50 p.m. launch time, the computer systems used by the range safety officer malfunctioned. Suddenly the launch was, in the parlance of NASA, "no go."

The range safety officer essentially serves as the Federal Aviation Administration for rocket launches off the U.S. East Coast. It determines that the coast is clear for launches, Houston Chronicle informs.

Discovery - NASA's most traveled spaceship - will reach the orbiting lab Saturday. The shuttle is carrying a load of supplies and the first humanoid robot to fly in space. Following its 11-day mission, Discovery will be retired and sent to a museum, Washington Post reports.