Scientist: Mona Lisa was a boy-lover of da Vinci 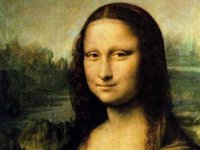 Italian researchers who specialize in resolving art mysteries said Wednesday they have uncovered the long-discussed identity of the model for Leonardo da Vinci's Mona Lisa.

Silvano Vinceti, chairman of the Italian national committee for cultural heritage, said the Florence-born artist's male apprentice and possible lover Salai was the main inspiration for the picture.

But his claim was immediately disputed by experts at the Louvre in Paris, where the painting is on display, Deutsche Welle reports.

Mr Vincetti said the artist and his effeminate apprentice had an "ambiguous" relationship. Salai and da Vinci worked together for 25 years and is believed to be the inspiration behind several of the Renaissance artist's works.

Mr Vincetti said: "Close examination of a high-quality digital copy of the portrait had revealed an L for Leonardo and an S for Salai."

The findings have been refuted by French art historians at the Louvre museum in Paris, where the Mona Lisa is one of the centre's star attractions, according to Sky News.