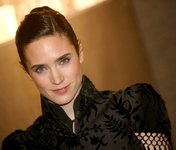 Jennifer Connelly and Paul Bettany are expecting their second child together.

The 40-year-old actress - who already has children Stellan, seven, with the English actor and Kai, 13, from a previous relationship with David Dugan - has confirmed her pregnancy just weeks after the pair appeared on the red carpet for the New York premiere of Paul's new movie 'The Tourist', CTV.ca reports.

The couple started dating in 2001 after co-starring alongside Russell Crowe in A Beautiful Mind - for which she won an Oscar for Best Supporting Actress.

They wed in a private ceremony in Scotland on New Year's Day 2003 and were joined by son Stellan the following August.

Speaking about their family, Connolly once said: 'Becoming a mother has made all the difference in terms of learning to take more responsibility for myself and my life.

'Parenthood changed the way I do everything. 'The biggest thing for me is wanting my kids to grow up safely and have happy lives. To me, that's enough', Daily Mail reports.