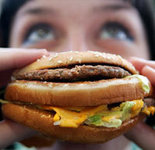 A Brazilian court ruled this week that McDonald's must pay a former franchise manager $17,500 because he gained 65 pounds while working there for a dozen years.

The 32-year-old man said he felt forced to sample the food each day to ensure quality standards remained high, because McDonald's hired "mystery clients" to randomly visit restaurants and report on the food, service and cleanliness.

The man also said the company offered free lunches to employees, adding to his caloric intake while on the job. His identity was not released, The Associated Press reports.

In a statement released after the ruling, McDonald's said that not everything on its menu will make you fat: "The chain offers a large variety of options and balanced menus to cater (to) the daily dietary needs of its employees."

The company says it is weighing the decision of whether or not to appeal the court's ruling, according to The Consumerist.