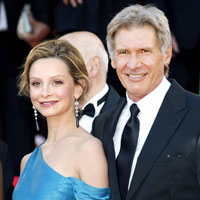 Actor Harrison Ford and his fiancee Calista Flockhart have finally tied the knot. New Mexico Governor Bill Richardson presided over the nuptials and has confirmed the news.

The couple, who were seeing each other for several years and got engaged last year, were married at the governor's mansion in Santa Fe, Oneindia reports.

They tied the knot in Santa Fe, N.M., where Ford is filming new movie Cowboys and Aliens. Their marriage license was filed today in the County Clerk’s Office.

Ford, 67, and Flockhart, 45, began dating after meeting at the 2002 Golden Globes. They both have been raising Flockhart’s 9-year-old son, Liam, whom she adopted in 2001, Peace FM Online reports.