THE famous dress that earned Princess Diana the nickname "Daring Di" was auctioned yesterday at £192,000, far above its expected selling price of £50,000. The taffeta gown was bought by Jorge Karur, the owner of fashion museum Museo de la Mode in Santiago, Chile. 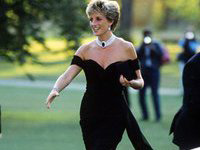 "I know now that dress will be taken proper care of especially when you consider that it has spent the last two decades in a black bin bag in David Emanuel's garage," said auctioneer Kerry Taylor. "I spoke to Mr Yarur after the auction and he announced that upon his death, not only this gown, but all the other important Diana dresses he owns will be donated to Kensington Palace. I am delighted that one day this dress will come home. It's the perfect ending to a perfect sale.", Vogue.com informs.

Jorge Yarur, founder of the museum which bought the dress, said that when he died he planned to donate it and other Diana dresses he owned to Kensington Palace, where she lived from the time of her wedding in 1981 until her death in 1997.