Christina Applegate Is Getting Married for Second Time on Valentine's Day 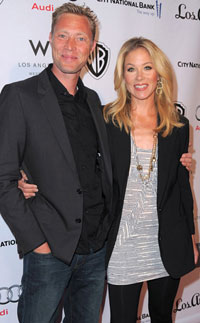 Christina Applegate Is Getting Married for Second Time on Valentine's Day

"The couple, who have been dating for two years, got engaged on February 14, 2010," her rep confirms in a statement. "There is no set date for the wedding at this time."

This will be the second marriage for both the actress, 38, and the Dutch rocker, 41, New York Daily News informs.

According to OK! Magazine, Christina and her ex-husband, actor Johnathan Schaech, were married from 2001 to 2007.

In her battle against breast cancer, Christina underwent a double mastectomy in 2009. She also lost boyfriend Lee Grivas in 2008 to an apparent overdose.

Last year, Christina reflected on her tough times, while also touching upon the new love in her life.

"You know, on one hand there’s all of that, and on the other hand I’ve fallen very much in love, so that’s another thing that’s happened," she said in March 2009. "So there’s a good end to every story."