Alec Baldwin and Steve Martin to Host the Oscars

The coming Oscar show will have a pair of hosts who are not so much matched as deliberately mismatched: Steve Martin, the versatile comic, and Alec Baldwin, a straight man who sometimes reaches for a laugh. 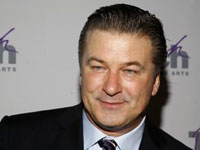 Alec Baldwin and Steve Martin to Host the Oscars

The Academy of Motion Picture Arts and Sciences announced the pairing late Tuesday, just days after the rival Golden Globes named the comedian Ricky Gervais as its host. Both shows appear poised to give the movie awards a dose of sharp-edged humor.

"We’re expecting a spirit du combat," Bill Mechanic, a producer of the Oscar show, said of the Martin-Baldwin matchup.

Mr. Martin presented the Oscar broadcast in 2003 and 2001, and received an Emmy nomination for the first of those appearances. Mr. Baldwin, a film and television actor, has never hosted the show, but he received an Oscar nomination as best supporting actor in 2004 for his role in "The Cooler," New York Times informs.

Telecast producers Bill Mechanic and Adam Shankman said Martin and Baldwin are "the perfect pair of hosts for the Oscars." The producers have said they hope to resurrect Oscar's ratings and make the show more fun by building on the changes introduced at February's ceremony, which tinkered with the way awards were presented and featured Broadway-style musical interludes.

Bringing in a pair of hosts, while not unprecedented, continues that theme of change, The Associated Press reports.

Martin 64, has hosted the event twice before, but Baldwin, 51, has never helmed the Academy Awards before. The co-hosts will take over their duties from Hugh Jackman, who pulled out of the running for the high profile gig last week, according to Sify .

"I am happy to co-host the Oscars with my enemy Alec Baldwin," Martin, who hosted the ceremony solo in 2001 and 2003, said in a statement.

"I don't play the banjo but I'm thrilled to be hosting the Oscars—it's the opportunity of a lifetime," added Baldwin, a veteran movie star and past nominee who just collected his second straight Emmy for being freakin' hilarious on 30 Rock, E! Online reports.