Dell asserted Thursday its technology to digitize medical records for physicians working with hospitals is less expensive and complex and more compatible with outside systems, hurdles that have held back the movement to put records online. 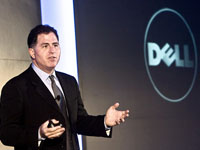 Traditionally, medical records have been written on paper and kept in folders. Active records are usually housed at the clinical site, but older records (e.g., those of the deceased) are often kept in separate facilities.

The advent of electronic medical records has not only changed the format of medical records but has increased accessibility of files. The use of an individual dossier style medical record, where records are kept on each patient by name and illness type originated at the Mayo Clinic out of a desire to simplify patient tracking and to allow for medical research.

President Barack Obama has touted electronic medical records as an expense- saving measure that will offset the huge cost of his health-care reform plan. Critics have scoffed at the idea, saying savings from online medical records is a pittance compared to reform's overall cost.

Dell said its product is meant for hospitals who want a system compatible with those of their affiliated physicians. The company said it reduces upfront cost and can be configured to the needs of each hospital and the affiliated doctors' practices.

Two hospitals, Tufts Medical Center and Memorial Hermann, have already adopted Dell's technology and say they could retain more practices thanks to it, CNN.Money.com. reports.