'Bruno' Banned in Ukraine for Dissoluteness

According to Reuters, the country of Ukraine has banned Sacha Baron Cohen's Bruno for "artistically unjustified exhibition of sexual organs and sexual relations, homosexual acts in a blatantly graphic form, obscene language, sadism, anti-social behavior which could damage the moral upbringing of our citizens." Nine out of 14 commission members voted for the ban, Entertainment Weekly reports. 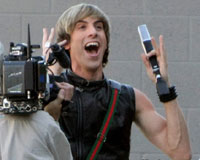 'Bruno' Banned in Ukraine for Dissoluteness

Cohen's new incarnation travels to the United States to fulfill his dream of being "the biggest Austrian superstar since Hitler."

Lines like that, as well as his explicit sexuality, gay sex scenes and nudity have shocked some.

But it has proven popular in the United States and Britain, where it reached the top of the box offices, Reuters reports.

In the meantime Universal Pictures UK is releasing an edited version of Sacha (SAH'-shuh) Baron Cohen's comedy that will tone down the racy moments so it can earn a 15 certification from the British Board of Film Classification. That would allow those 15 and older to see it.

The version now playing has an adults-only 18 certification that prohibits those younger than 18 from seeing the movie, The Associated Press reports.